Heritage days began in 2001 by the Historical Commission in San Jacinto County, but then just sort of was forgotten.  Heritage Days was started to create interest in the history of San Jacinto County, and to preserve and educate the younger generation about the history of our County.  The San Jacinto Historical Commission envisioned a day of fun and activities that educated in an entertaining way and brought the community together to celebrate the birthday and history.

In 2013 Heritage days was reborn, to ignite interest in the Old Jail Museum and the Old Town buildings.  San Jacinto County was created in 1870 from parts of Liberty, Montgomery, Polk and Walker Counties.

In 1877, the north half of the Old Jail, a beautiful Victorian public structure was finished.   The bricks were made with local red clay in a kiln on the site.  It was built across the street from the original two story wooden courthouse.  It was enlarged in 1911, when the hangman’s device and new cells were added.  The downstairs area consists of the former receiving area/dayroom and jailers quarters.  It was customary for the jailer’s wife to cook for the prisoners as well.  Even though the town has moved, this old jail served as the county jail until 1980.

About March of 1915, a fire started in the Old Courthouse and consumed the courthouse totally.   There was nothing but ashes.  The commissioners moved quickly and picked a new site for the courthouse, on higher ground.

The existing courthouse was built in 1918 and the whole town moved to its current location.  Many of the buildings sitting on the North side of the courthouse were moved from the Old Town Site using logs to roll them up the hill.

It was a new start for the town of Coldspring and San Jacinto County.  The building on the corner on the west side was built soon after in 1921 and served as a general store up until the 1950.  The store on the Corner on the north side of the courthouse was the local bank for many years.   Other buildings followed and Coldspring was a prosperous county seat of an agricultural county.

In 1984 the San Jacinto Historical Commission secured over $300,000 to restore the Old Jail through public and private fundraising for the restoration.   There is a list of those that helped on the wall near the water fountain there.

The old cistern on the front lawn was discovered during restoration work.  It is urn-shaped and about 20 feet deep.  During the restoration, 3 young men worked for 6 weeks, scraping paint and grime from the cells and walls.  No blasting was allowed to be done to help clean the antique brick.  One man spent two weeks hand-washing the entire brick exterior.

The Heritage Society soon thereafter purchased the land next to the jail where the Old Courthouse once stood.   The historical buildings were donated or purchased and moved to their present location.

The Old (1890) Adams Log Crib/ Ellisor Crib, was dismantled in the summer of 1984 and moved to its present location.  Its proposed use was that of farm tool and equipment exhibit.
The old Waverly School Building (Rosenwald School) built in 1926, was moved twice before coming to the Old Town site in the mid –eighties.
The former Camilla Post office built in the 1930’s has a lobby, main room and a storage room.   It was donated and moved there in the mid- eighties.
The Old Jackson Store (1890) was a wooden store building from Magnolia retaining its store features.
The red wood building is a replica for the first general store in the county created by a partnership between Robert H McCanahan and Robert  T. Robinson.
The Urbana Depot was relocated from Shepherd and was part of the Houston East and West Texas Railroad.  The Horn off the last train to come through San Jacinto County is located inside the station and is still working!

Since 2013 the Historical Commission has reenacted Heritage Days.

There is a mock hanging of a rascal from the old days, along with the capture and reading of the charges and pronouncement of his sentence.  They also have a shotgun wedding and other festivities.

So please celebrate our county’s heritage and have some fun.  Bring the kids and grandkids and let them learn about the history of San Jacinto County, The Old Jail will be open for tours!

Also, activities will start at 10 am to 3 pm at the Old Town Site.   There will be a hayride, sack races, refreshments and more. Dress in early 1900 attire and join us for a day of fun. 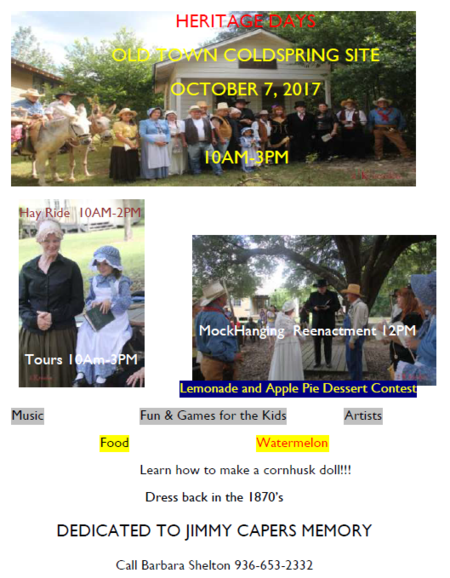